The Klasconnect team wanted to build a mobile app for an existing web version of the learning tool, this made sense because more young people (students) own and are active on smartphones than desktop computers. I made sure to outline essential features already existing and during the design process, ensured the experience on the mobile platform was consistent with the web version.

Ensure the design of the mobile app is

consistent with the existing web app

The goal of the Klasconnect learning tool is to make interaction between students and lecturers easier ultimately making learning a better experience. The team built a web application to achieve this but statistics estimates that there are over 172 million mobile subscribers in Nigeria and smartphone adoption has increased significantly.

Students have the lion share of the 172 million mobile subscribers, this means that most students access the internet using their mobile devices, hence for this learning tool to achieve its objective it must cater to this large number of users (students).

Next, I interviewed some students who use learning tools to know if they found such tools useful, what features they interact with frequently and what features they would like to see. I also explored other similar applications to understand how they work and to ascertain how best to visually represent features on the mobile app. This was helped me grasp the current experience, draft personas and provided direction for the userflow. 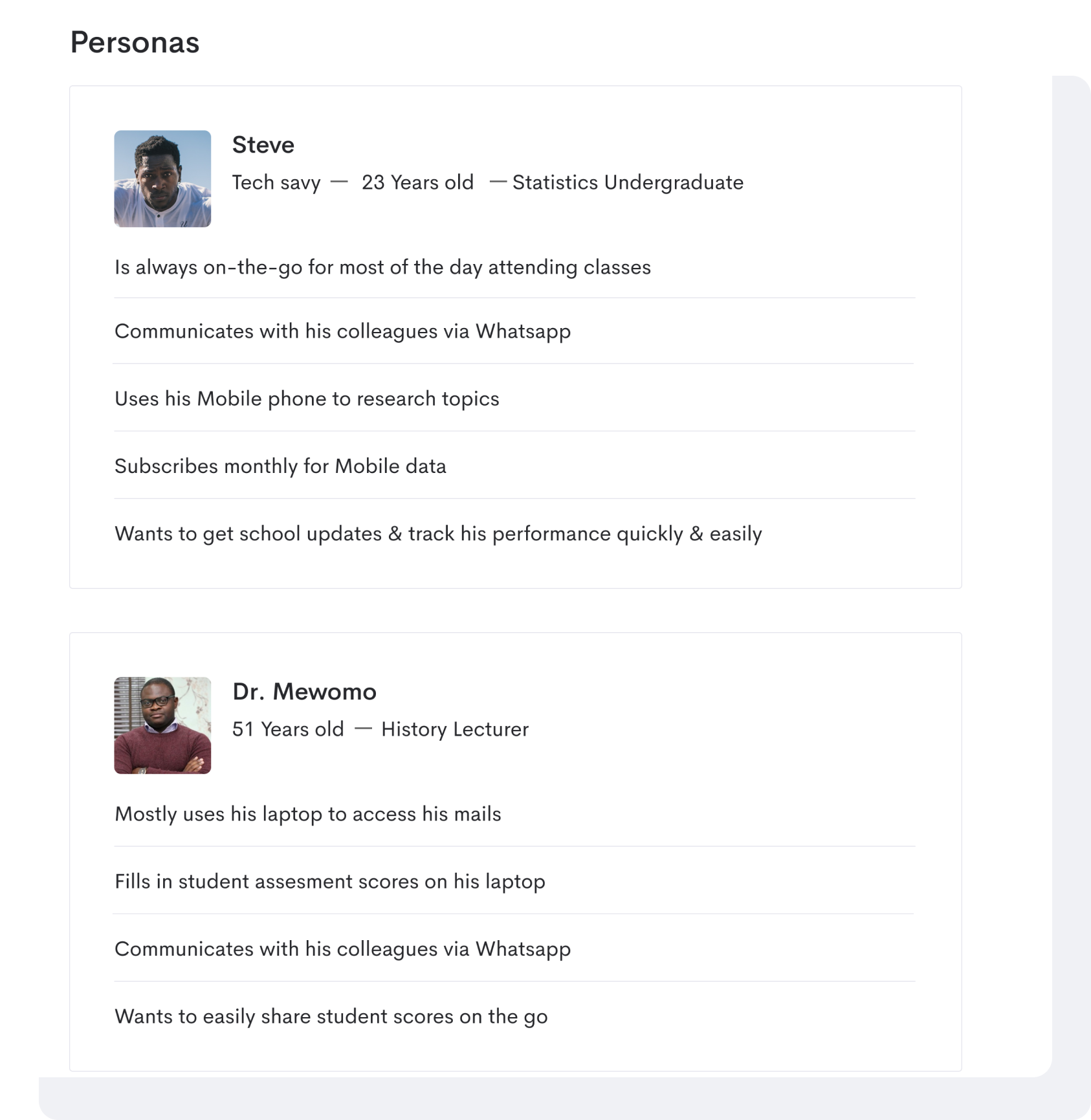 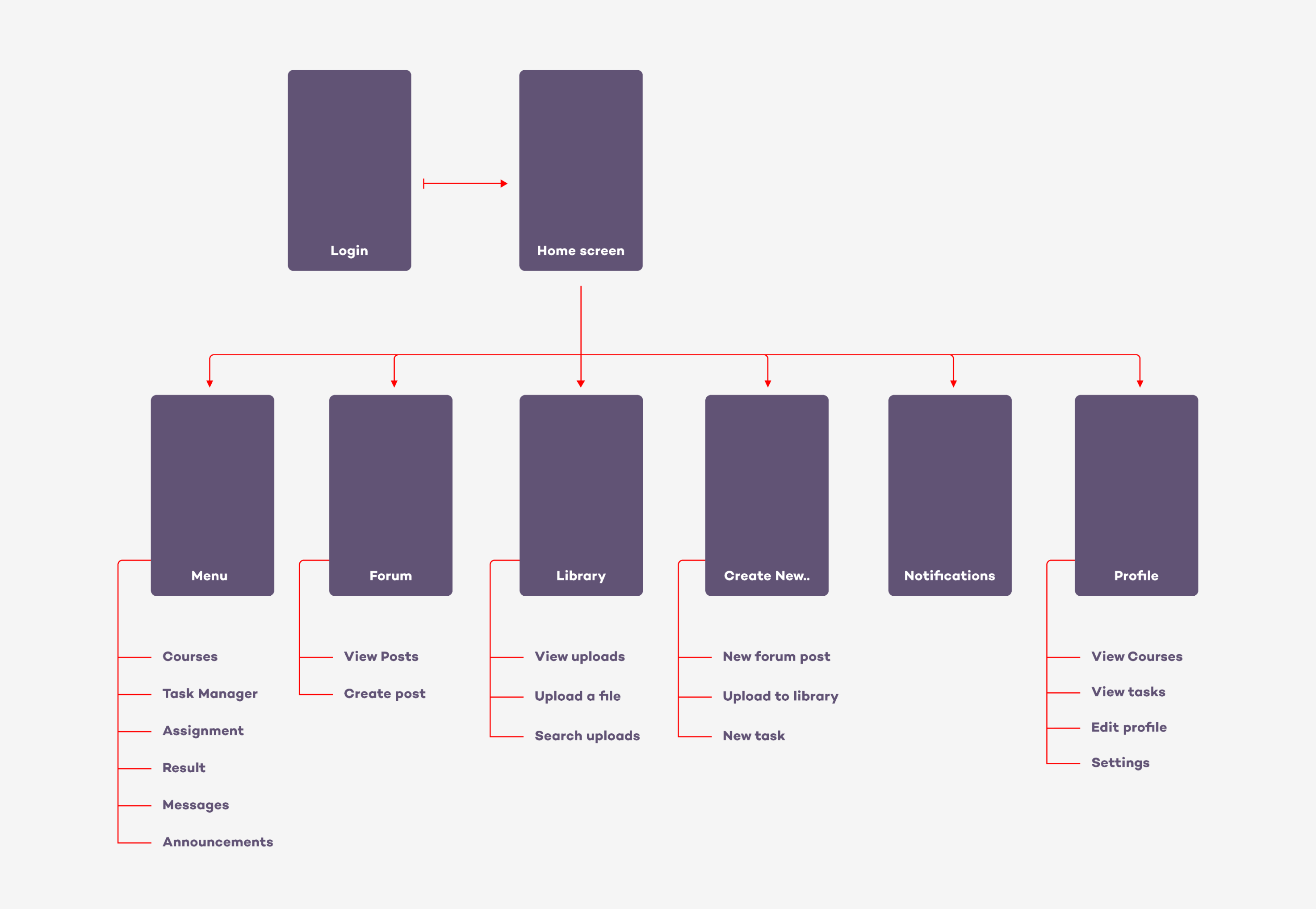 Userflow for the Klasconnect app

Based on interviews and the user flow, I designed wireframes. Designing low-fidelity screens allowed me to quickly define the layout of most of the major screens. 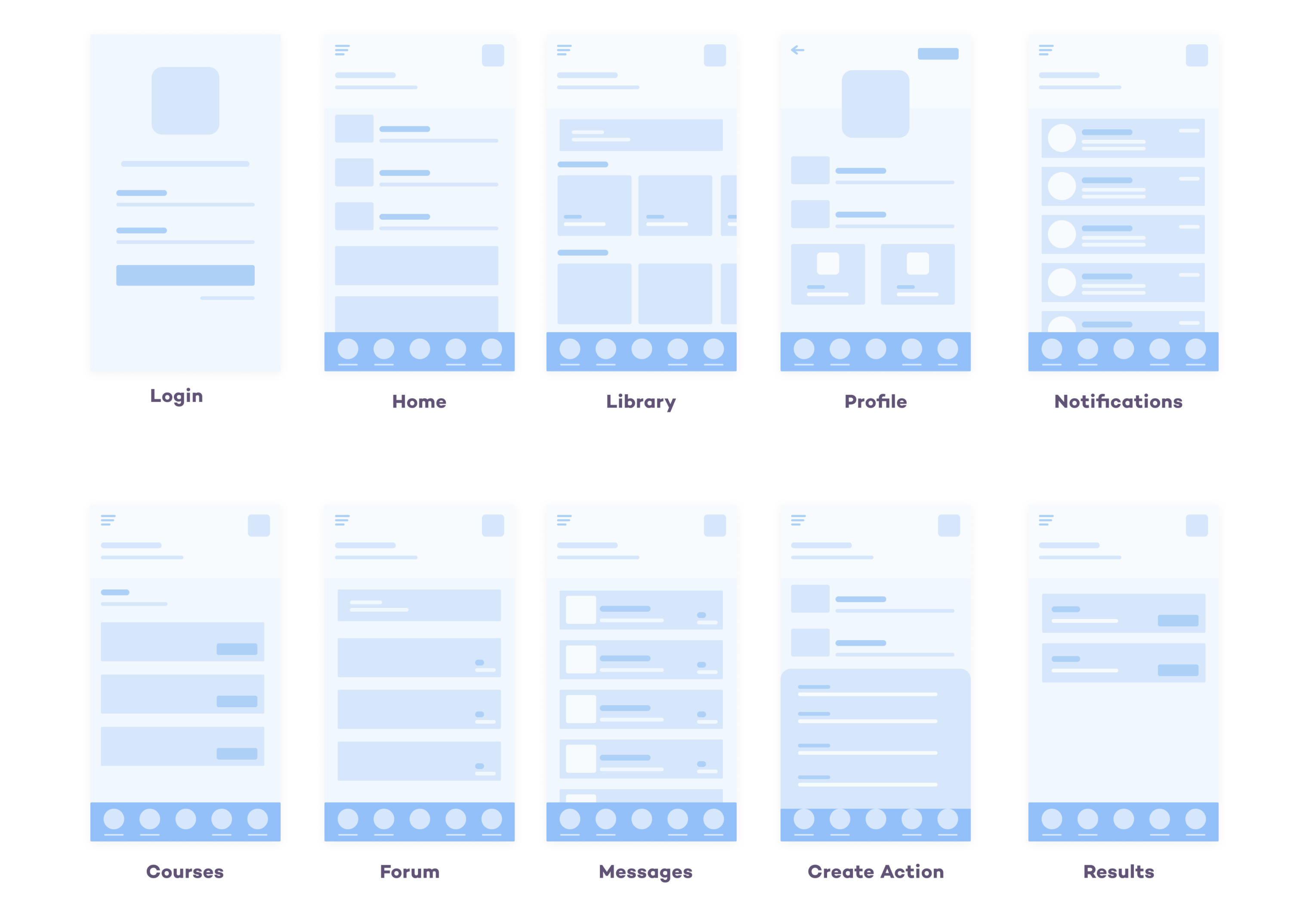 Time to test!!! I collaborated with some students undergoing undergraduate studies to recruit students to test the prototype created in Figma. We were able to get seven (7) students to test, we had a mix of students - s ome have at some point used a learning tool like Klasconnect while others had never interacted with such tool. From the test session, I noted parts of the app users had issues interacting with and also got direct feedback on some features.

One feature users had issues interacting with was the task manager on the homescreen which had a full calendar view of upcoming and past tasks, I noticed users were overwhelmed by this view so I decided to iterate on the design only showing a week view of upcoming events and took off past events from the view to keep it clean and ensure users focus on upcoming tasks.

After all these changes were made, another test session was scheduled, feedback from these sessions were key to iterating the interface design into the final solution.

Simplicity was key to the design of the apps because they had quite a number of features, so based on insights from research I ensured that the most used features were placed in a bottom navigation menu and so users can easily navigate to these features. 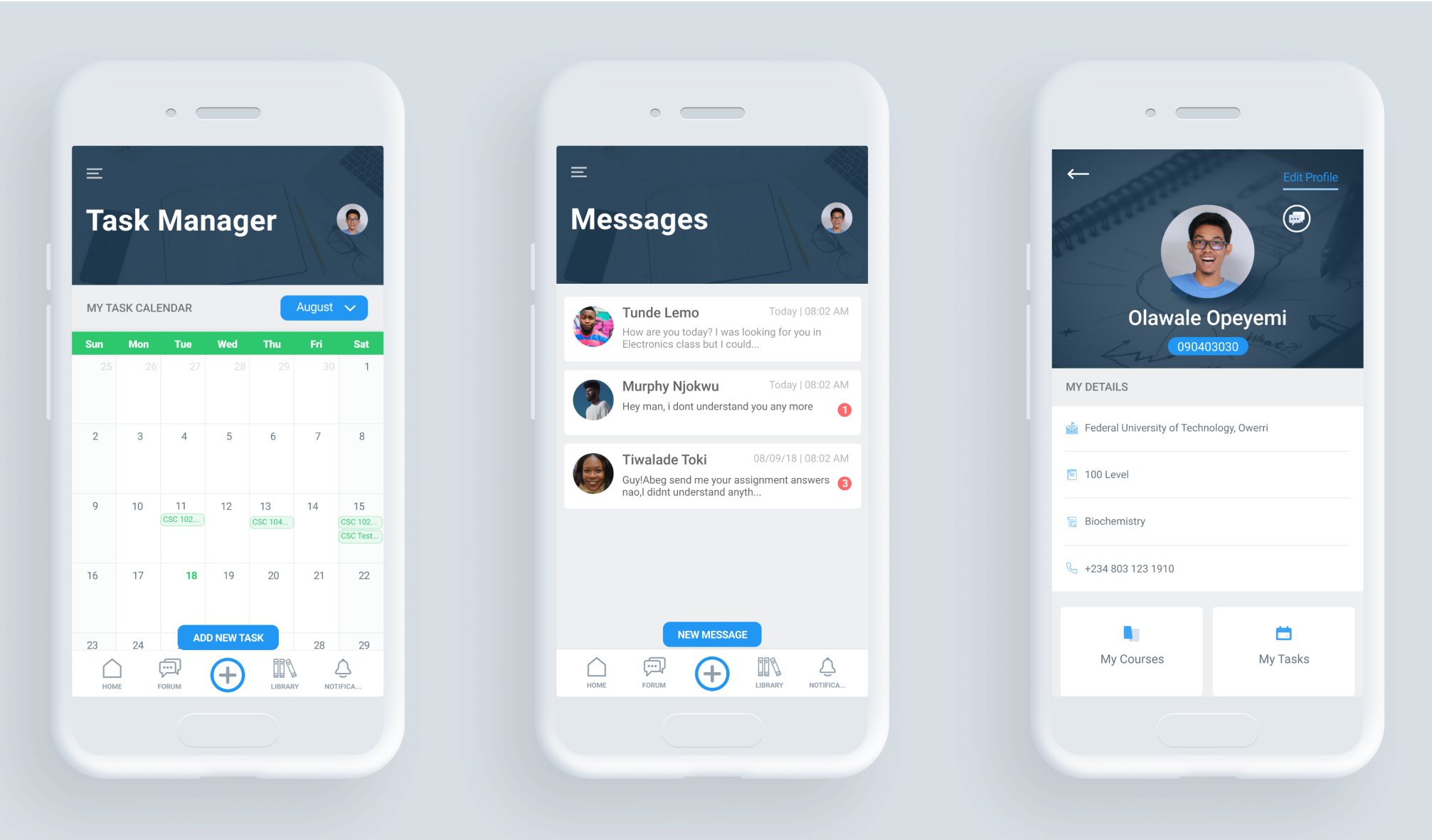 Other features were placed in an hamburger menu and each had a descriptive icon so it's easy for a user identify a feature by merely looking at the icons. 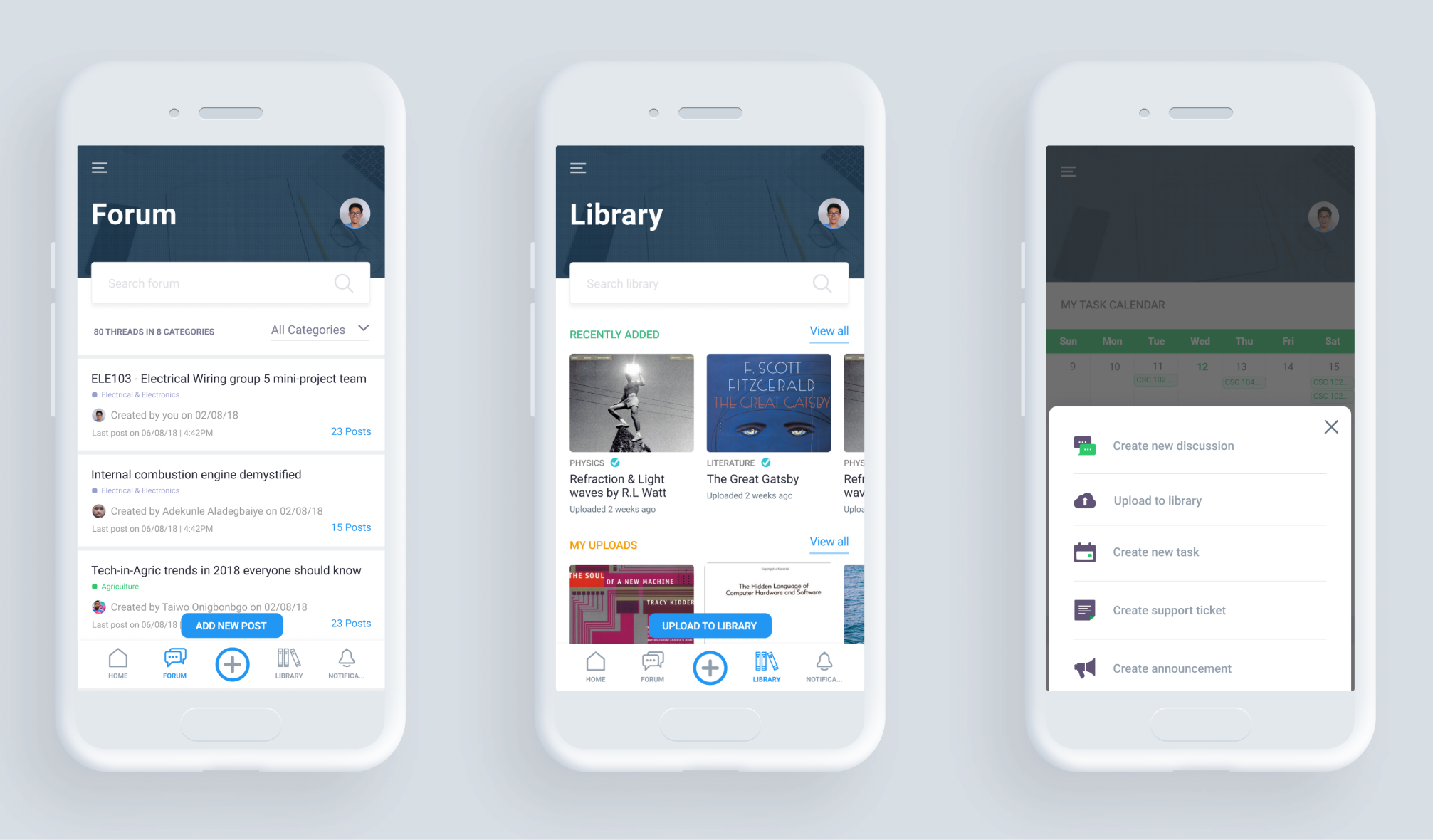 I really enjoyed working on the project but because this was a freelance project, I couldn't follow through the whole development cycle of the application.

Working in a multidisciplinary team to design a tool to help patients adhere to treatment.